Schedule a call or visit with your loved one:
German Centre • Edelweiss Village 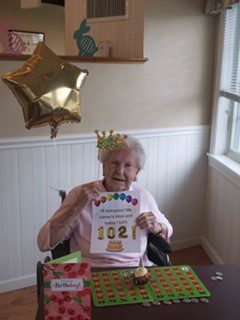 This week, Alice, an Edelweiss Village resident, turned 102. No big birthday parties took place, but Alice was treated like a queen by staff who interacted with her throughout the day. Lauren, a member of the activities team, spent time with Alice for a little Q&A. Here’s what we learned:

Lauren: For most of us, this is our first time living thru a pandemic. Can you name some of the pandemics/epidemics you’ve lived thru?

Alice: Spanish Flu, HIV/AIDS, SARS,H1N1, EBOLA,  Zika, Great Depression. I was born in April and the Spanish Flu started in August of that year, which was 1918. They said it started from sailors coming from foreign ports. When the Great Depression started, I was about 16 years old. I remember graduating from high school and wanted to get a job but the only job I was able to find was addressing envelopes on a typewriter.

Lauren: How Many presidents have you lived thru? Do you have a favorite president?

Alice: I don’t know the number, let me look some up on my iPad. (does a quick search!) I’ve lived thru a total of 18 presidents, from Woodrow Wilson to Trump. I was a baby when Wilson was president, so I just knew of him. Do I have a favorite president? That’s easy, obviously JFK. He was young, fun, attractive and smart!

Lauren: Do you remember where you were when JFK was assassinated?

Alice: Yes. I was standing by my mother’s bedside, she was ill at the time, listening to the radio commentator Walter Winchell and he stated President John F. Kennedy had been shot.

Lauren: How many wars have you lived thru?

Alice: I don’t know all but from what I can remember: WWI ended in November  of 1918, the year I was born -I was born in April. The attack on Pearl Harbor, WWII, I was in my 20s at the time, around 26 years old, and I remember everything was rationed. I worked at a hospital at the time and we had trouble getting help because all the men were going off to war. Korean War, Vietnam War, Gulf War, War in Afghanistan, Iraq War.